My redcurrant bush, having been prolific for the past five summers, turned up its toes and died half way though this year - but I’ve been given a huge bag of redcurrants by the same person who gave me some raspberry canes for my new office garden in the spring, so I’ve still been able to make some lovely, clear, ruby-red jelly as usual. I’ll use it for glazing grilled or barbecued lamb, stirring into gravy for a rich, slightly sweet flavour and swirling it though a creamy filling when I’m making mini meringues. Jelly is perfect for any fruit that would need ‘top and tailing’ if you were making jam with it - top and tailing is a fiddly, time-consuming process but as jelly is strained through a bag, the whole fruit can go in with no prep need first. The only downside with jelly is that it makes fewer jars than you’d get if you were making jam but, to be honest, three or four jars of redcurrant jelly is all I will really need until next year so that’s not a problem. 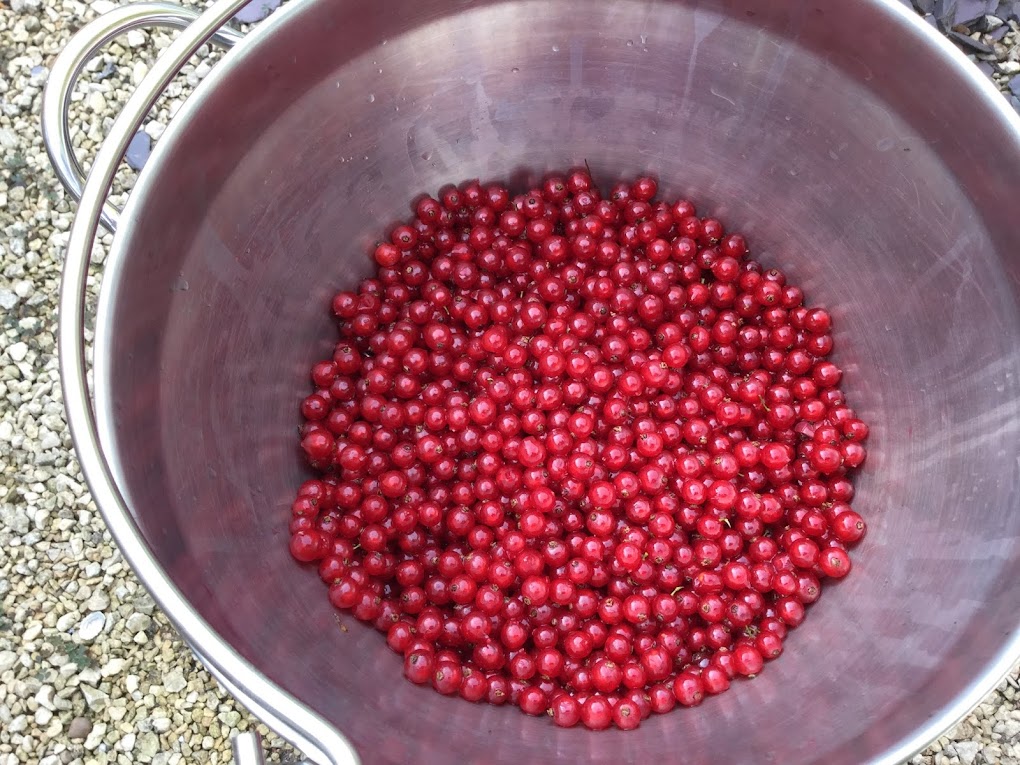 Start by sterilising your jam jars - the best way of doing this is by running them though the dishwasher on a 30-minute cycle. While they're in there, put 1kg redcurrants in a large, heavy-botomed pan - a proper preserving pan (like the one in the photo above) is ideal. Cook over a low heat for 20 minutes, then crush with a potato masher. Spoon into a jelly bag on a stand set over a large bowl (Tala do a really good bag and stand set, available from Amazon for about £10). Leave for several hours, or overnight, without touching the bag - if you move it, or press down on the fruit, you'll get cloudy jelly. By this time, the juice will have more or less stopped dripping into the bowl so carefully remove the bag from the stand (the fruit pulp can go on the compost heap).

Put a saucer in the freezer, then measure the juice and put it in the (cleaned) pan with 500g psugar for every 500ml liquid (you'll normally get pretty much exactly 500ml if you've used 1kg fruit).

Heat slowly, stirring until the sugar has dissolved, then turn up the heat and bring to the boil. Boil fairly rapidly for 1 min, then take the saucer from the freezer and put a few drops of the juice onto it. Leave for a minute then push it with your finger - if it wrinkles, the jelly is ready. If not, boil for another minute and test it again.

Ladle into the sterilised jars, top each with a waxed lid and seal with a cellophane circle (dampen the top of each circle first to help it stretch and form a tight seal). Store the jars in a cool, dry, dark place for up to a year.

This method, and these quantities, will work for pretty much any sort of fruit jelly.

If you just have a small amount of fruit - the last of the raspberries, for example - you can make a single jar of jam really easily: Start with 250g raspberries and 250g granulated sugar. Put the fruit in a large pan and crush it a bit with the back of a spoon. Cook over a lot heat until it starts to bubble. Meanwhile, heat the sugar on a low heat in the oven. Tip the warmed sugar into the pan and stir well. Turn up the heat and boil - without stirring - for 10 mins. When the setting point is reached (see above,) put it in a sterilised jar.

Keep a few whole strands (or 'strigs' as they're correctly called) of redcurrants, still attached to the stalks, in a rigid plastic box in the freezer to use for decorating desserts out of season. Unlike most soft fruits, they defrost beautifully without going mushy, and the strigs always add a bit of a wow factor to a pud in the middle of winter.